Sancerre, before the summer hordes

Anthony Gardner recommends visiting the ‘extraordinarily unspoilt and beautiful’ town of Sancerre while it remains the definition of sleepiness and tranquillity.
The situation was dire. It was 7.30 on a Thursday evening and we needed something to drink with our dinner. As we were staying in one of France’s most famous wine-producing towns, this shouldn’t have been a problem; but as I searched the narrow cobbled streets, my anxiety grew.
From the rue St Jean, with its old artisans’ workshops, down to the medieval ramparts, not a single shop was open. I felt like Diogenes in his search for an honest man. If I hadn’t bumped into a friendly Australian with a bottle of bordeaux to spare, we would have gone thirsty to bed.
Sancerre is in effect two towns. In summer it seethes with visitors and second-home owners; for the rest of the year it is the definition of sleepiness and tranquillity, and you can wander through it – as I did on that May evening – seeing barely a soul. But at all times it is extraordinarily unspoilt and beautiful: a symphony of ancient doors, pale lilac shutters, wrought-iron balconies and steeply pitched roofs.
Situated in the very heart of France, Sancerre stands on a hilltop 1,000ft above the surrounding countryside. This landscape was depicted 600 years ago in the exquisite paintings of Les Très Riches Heures du Duc de Berry and little has changed since. 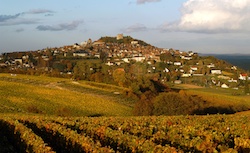 From the top of the Tour des Fiefs – the only one of Sancerre’s six towers to escape demolition after the Wars of Religion – you look down on a panorama of undulating vineyards, with the River Loire following its meandering course just two miles away.
The violent history that this picturesque charm masks is brought to life by a short walk around the town centre. The house of Jacques Coeur commemorates a key figure in the Hundred Years War, when the English were repulsed from Sancerre. Nearby, a Romanesque doorway is all that remains of a priory destroyed by the Huguenots, who endured an eight-month siege in 1573: before finally surrendering they resorted to eating rats, books and, in a few instances, each other.
Down the road a plaque commemorates royalist soldiers killed in the Revolution; rue MacDonald is named after a Scottish exile who became one of Napoleon’s marshals.
We first came to Sancerre to spend a week at a small, family-friendly language school called Coeur de France. It proved such a success that we returned this year for the fourth time. As the owners also have a modest vineyard, it is a good starting point for those keen to familiarise themselves with winemaking. The French for “hangover”, in case you’re wondering, is gueule de bois: “mouth of wood”.
The Duc de Berry – who, being très riche, could afford whatever he liked – declared that “the wine of Sancerre is the best in the kingdom”. I tend to agree. Clues to its superiority can be found at the Maison des Sancerre, an impressive hi-tech museum with holograms of grape-pickers and recordings of jolly drinking songs. Visits to dusty caves(cellars) can be arranged through L’Aronde Sancerroise, just off the main square, which represents 20 vignerons.
The townspeople are doubly spoiled, because one of France’s most delicious goats’ cheeses is produced a few miles away in the village of Chavignol. However, one local speciality I cannot recommend isandouillette, a kind of Stone Age sausage for fearless offal-eaters.
There are plenty of activities nearby to help work up an appetite. Our favourite was cyclo-railing – whizzing along five miles of disused railway track on a steel chariot powered by two bicycles. We also explored one of the Loire’s small islands by canoe and spent a memorable afternoon cycling along the river to Pouilly, returning with the early evening sun filtering through lines of tall poplars.
At Guédelon, an hour’s drive away, we visited a fascinating building project – the construction of a chateau (halfway to completion after 13 years) using medieval building techniques.
The greatest cultural monument in the area is the Gothic cathedral at Bourges, with its massive flying buttresses and ethereal curving aisles. It is worth making a detour through the delightful woods that surround the village of La Bourne, a pottery-making centre for almost 1,000 years.
But wherever you decide to explore, it is a pleasure to take the winding road back up to Sancerre – provided you have stopped to buy a bottle of wine en route.
ACTIVITIES
Coeur de France (4879 3408; www.coeurdefrance.com) offers one-week language courses from €395. Book cycling, riding and canoeing with Loire Nature Découverte (4878 0034;wwwloirenaturedecouverte.com). Cyclo-railing from Port Aubry from €24 for two hours (6 8522 8872; www.cyclorail.com).