The history of La Thaumassière is intricately linked with the rich history of Sancerre.

La Thaumassière, the school’s château, has over 400 years of history behind it. Today, students attend class in classrooms on the ground floor and stay in apartments upstairs. But life wasn’t always like that for this old stone château…. 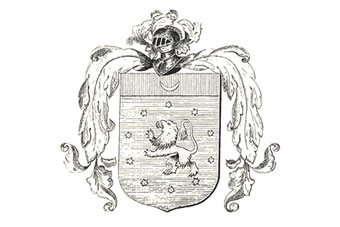 La Thaumassière was constructed circa 1590 under the reign of King Henri IV by César Thaumas de la Thaumassière, personal physician to the Prince of Condé. A private residence, the elegant stone building was built for comfort and practicality: over twenty rooms occupy the three floors, more than 50 windows and 3 “French” doors (windowed doors) let in the sunlight. Fireplaces were everywhere. Under the château, a vast vaulted stone cellar was constructed to store wine (Sancerre of course) and food. 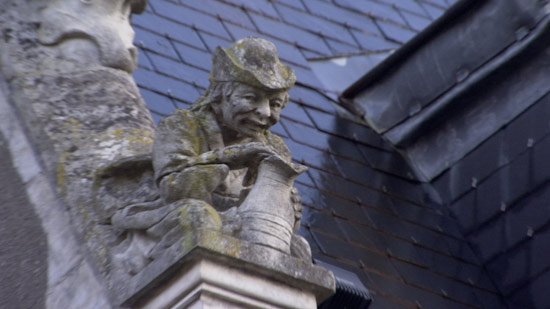 From the courtyard, we also see his sense of humor in the finely carved stone statues (a local winemaker, a “buveur” (drinker), a musician and a cherub) decorating the stately roof.

Being of an aristocratic family, César Thaumas de la Thaumassière proudly displayed his family’s coat of arms. Exquisitely carved in stone, he had the large sculpture embedded in the courtyard wall facing the entrance to the property (where no one could miss seeing it).

In 1621, the Prince of Condé took up residence in the château to oversee the demolition of the feudal château and the ramparts of Sancerre as ordered by King Louis XIII in response to a rebellion by the citizens of Sancerre.

The son of César Thaumas, renowned French historian Gaspard Thaumas de la Thaumassière (Viscount of Esteuf, Lord of Puyferrand and Barrister to Parliament), was born at La Thaumassière. He went on to become an important political figure in our province of Berry and to write several seminal works on the history of the province. He and his brother inherited the property upon the death of their father César in 1645 during the reign of the Sun King, Louis XIV.

La Thaumassière remained in the family, through marriage and inheritance, until the middle of the 18th century when it was purchased by Monsieur Sylvain Urpillot, head of a Sancerre bourgeois family. 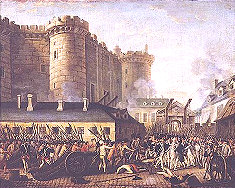 Upon his death, the building passed to his wife, then his daughter and her husband, Edouard Macnab (descendent of family from Scotland who came to France in the 15th century to fight against the English during the Hundred Years War).

The Treasure of La Thaumassière: A Piece of the Bastille 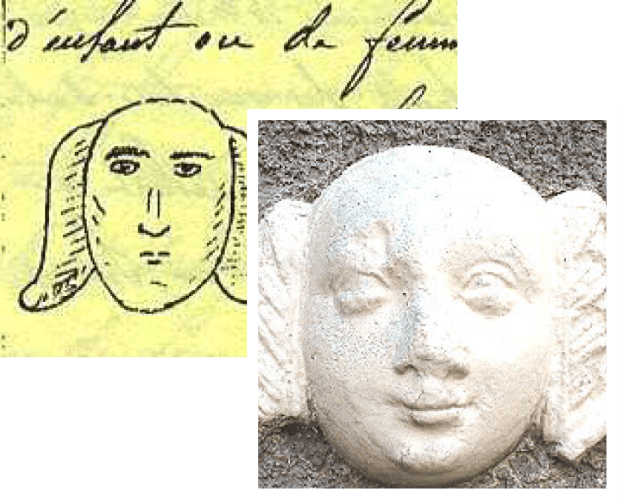 In 1789, Macnab traveled to Paris during the fall of the Bastille and returned with a sculpted stone head from the famous prison. Today, this piece of the infamous Bastille can still be seen, displayed in the eastern wall of the courtyard at La Thaumassière.

During the revolutionary period, properties of the Catholic Church were confiscated by the Revolutionary government and sold at auction. When Napoleon assumed power, Macnab purchased the ruins of the hermitage of Saint Romble (located on the eastern slope of Sancerre). He salvaged the beautiful hand-carved white stone blocks and added them to the southern façade of La Thaumassière about 1800.

Upon Edouard Macnab’s death, his son Alexander inherited the property. He in turn passed it down to his daughter Philippine and her husband Monsieur S. Chenu. 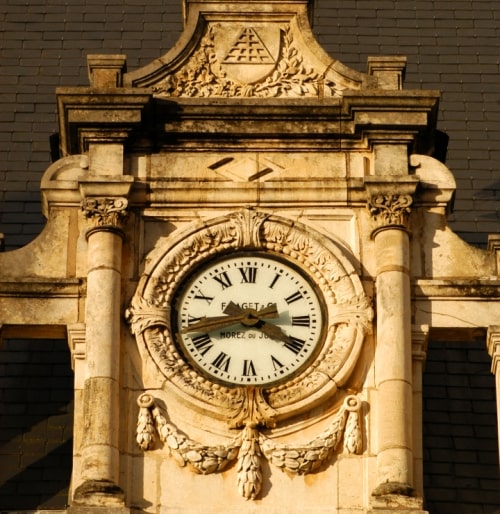 But changing La Thaumassière from a private residence to a bank would require extensive remodeling. 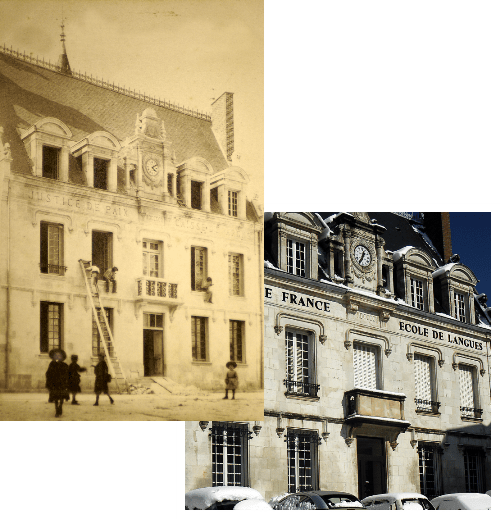 Eventually, La Thaumassière’s days as a bank came to an end. 103 years after purchasing the building, the Caisse d’Epargne bank descended the hilltop town in June 2001 for a modern facility with easier access at the foot of Sancerre.

The 16th century stone walls and oak parquet floors were reinforced, the roof line altered, offices constructed and a large, secure safe installed. A handsome sculpted stone staircase was built leading from the grand entrance on the ground floor up to the magnificent teller windows posed on splendid white marble countertops. On the southern façade, the carved white stone from the hermitage of Saint Romble was preserved and transformed into the “modern” Belle Époque style. Elegant white stone cornices, a balcony and a clock appeared. Roman numerals carved in the stone under the clock commemorate the commencement of the restoration project in 1901; an elaborately carved walnut mantel in the old Director’s Office on the ground floor bears the roman numeral date of 1903, the year of the project’s completion.

For the first time in it’s 400 year history, La Thaumassière was for sale to the general public!

A debate raged in Sancerre about the future of this historic structure. Should the city buy it? If not, who? For what purpose? Hotel? (Too small, limited parking.) Restaurant? (Much too big.) Offices? (No need.) There was one issue on which there was universal agreement: the building should be acquired soon so that it would not deteriorate and thus require too much investment which would discourage potential buyers. But it should not be sold to “just anybody”.

Caisse d’Epargne had promised the City of Sancerre that it would take into consideration the wishes of the city and sell La Thaumassière to a carefully selected, qualified owner who would use it in a manner befitting the dignity of the building. The city was also sensitive to such issues as limited parking and noise (besides being located across the street from the town hall, the neighborhood of Sancerre in which the building is located is a classified historic district).

Furthermore, they would be delighted if a buyer could be found who would generate economic activity and breathe more life into the neighborhood. 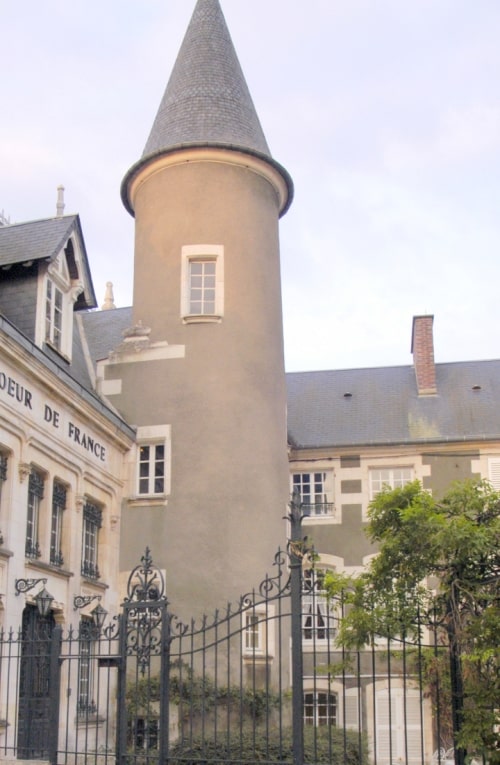 A language school — here was a solution to the problem that responded to the requirements of the bank AND the wishes of the City of Sancerre. Marianne and Gérard Chartrand, founders of Coeur de France Ecole de Langues, learned of the Caisse d’Epargne’s plans to sell the building in early 2001. Following about a year of negotiations, the purchase was finally announced to the Sancerre city council at their meeting of March 20, 2002. Reaction was immediate and positive.

Following extensive remodeling in 2002, Coeur de France moved into the building in January 2003. The ground floor has 5 classrooms, a large reception area with wifi access for students, restrooms, etc. The upstairs floors house 3 apartments (the Gabriel studio, the one bedroom Margaux and the two bedroom Louis). The historic courtyard has been restored with chairs and tables arranged on the large terrace beneath the carved stone coat of arms and the sculpted white stone head saved during the demolition of the Bastille.

Plans for the 21st Century

La Thaumassière, Coeur de France’s center of language learning, is a place of cultural exchange for our students and Sancerre residents alike. Here an Asian student learns French alongside an African, North American or European. A student from Brazil talks football with a fellow Italian student — in French, of course! And added to the mix are the warm personalities of our curious and welcoming Sancerre neighbors who have a standing invitation for coffee in the courtyard.

As La Thaumassière begins its 5th century, our responsibility is to preserve it for future generations. We recognize that, although we’re the owners of this treasure, we’re really only the custodians of this piece of history as it continues its voyage in time.