Learning French in the Loire

Simon Spilsbury went back to school to improve his dreadful French, and he took the whole family with him.
This is a holiday? Kiah, centre, and Imogen, right, in class (SIMON SPILSBURY)
It is a well-established fact that most of us Brits are dreadful at foreign languages. Wouldn’t it be wonderful to spend this summer’s holiday in France not just pointing and shouting pidgin French, but actually conversing with our fellow Europeans? To be able to ask for a coffee/baguette/train ticket without blank looks all round?
I’ve dreamt of that for years, but my schoolboy French has got rustier and rustier. And so, this year, the plan was to put it right, set a good example for my kids and equip them with the necessary tools so that they didn’t have to stumble into language barriers their whole life.
Potential help was at hand: total immersion. The theory goes as follows: going to a French school, in France, where French teachers refuse to speak anything other than French is an effective way of, you guessed it, learning French. This is not a new concept — but doing it with the whole family is. 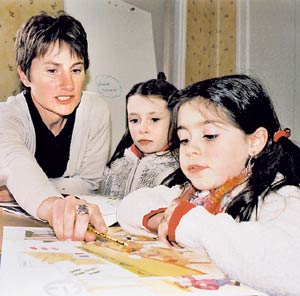 Note: These accommodations are strictly nonsmoking and no pets permitted.
*Average weekly rate. Rates vary according to dates, etc. For a precise quote for your dates, please request a price quote.